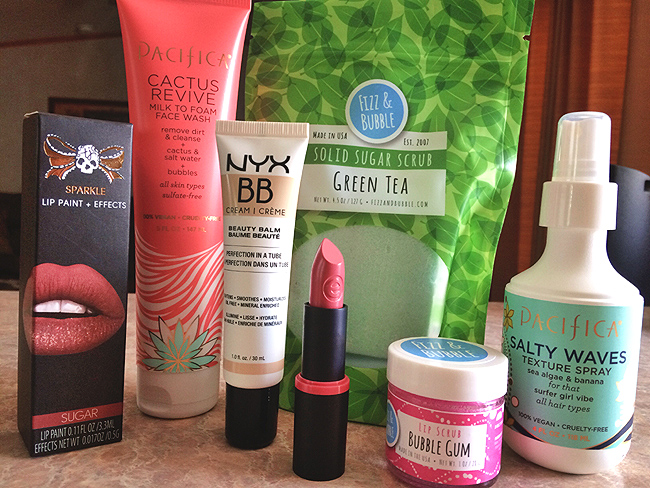 I bought some new stuff from Ulta the other day, so I figured I would make a post and let you guys know my thoughts about each of these products.

Pacifica Salty Waves Spray
I’ve liked most Pacifica products that I’ve tried, so I was excited to try this. Unfortunately this spray doesn’t seem to do much of anything for me. The only good thing I can say about it is that it helps give your hair some volume so it isn’t laying so flat, and it doesn’t leave your hair feeling crunchy or gross. However, it did not give my hair waves of any kind. I tried this spray on damp hair and then blow drying, I tried it on dry hair, and I tried it on soaking wet hair and let it dry naturally without brushing. No matter what I did, my hair was still just as straight as it always is. If you’re wondering about the smell, it’s a very mild scent. I get a slight whiff of banana when I spray it on, but it’s hardly noticeable.

NYX BB Cream
This product is not new to me. I’ve been using it regularly for over a year now in place of foundation, and I love it. It moisturizes and feels much lighter on my face than foundation does. I also find that it works just as well to cover up blemishes and even out my skin tone.

Fizz & Bubble Green Tea Sugar Scrub
This is my first time trying this brand. I’ve used other sugar scrubs in the past, so I thought I would give this one a try. I didn’t particularly care for it, and I would not buy this one again. I think I prefer a scrub that is in a container instead of using a bar like this. It does feel rough on your skin, but it basically does what it’s meant to. My skin did feel softer after using this. My main issue with this particular scrub is the smell. I thought it smelled awful. I’ve used other Green Tea products that smelled nice, but this one sure didn’t. It might sound odd, but I kept getting a whiff of something that smelled like peanuts. I am open to trying some of their other scrubs in the future, but I will leave this particular one on the shelf.

Fizz & Bubble Bubblegum Lip Scrub
This is another Fizz & Bubble product I bought to try, and this one I actually liked. It smells and tastes just like delicious bubble gum! It also does what it’s meant to and makes your lips feel soft. If bubble gum isn’t your thing, they have other flavors as well. I was originally going to buy the Mint Mojito, but they were sold out of that one.

Essence lipstick in shade Natural Beauty
I was browsing around Ulta when I stumbled upon this lipstick. It was only $2.99 and the color was right up my alley, so I figured I would buy it. It’s not bad for a cheap lipstick, but it doesn’t stay on very long so you need to reapply it. I would also prefer if it was more matte, but I do really like the color.

Pacifica Cactus Revive Face Wash
I already owned the Cactus Water toner prior to purchasing this. The Cactus Water works really well to remove any leftover makeup residue on your face, but I was disappointed that it didn’t smell like cactus. I was still curious about the cactus face wash, so I decided to try it. I think I’ve now found a new favorite cleanser! I fell in love with this from the moment I used it. It smells just like a cactus plant! That might not be your thing, but I’ve always liked the smell of cactus, so I was pleased to discover this cleanser smells just like it. It also has a great milky texture that foams up when you’re scrubbing your face. I was also impressed with how well it seemed to remove makeup. I even used my toner afterwards (in which there is usually still makeup residue that comes off on the cotton ball), but the ball looked clean. That’s what I like to see. This cleanser contains cactus oil, coconut, and Vitamin E, which are all good for your face. After washing it off, my face felt soft and not dry at all. Pacifica also has a Sea Foam cleanser that I really want to try at some point.

Tattoo Junkee Lip Paint in shade Sugar
I also stumbled upon this at Ulta and thought I would try it. It’s basically a matte lip cream that comes with a little container of glitter that you can put on for a sparkle effect. You can do this with any lip cream  if you have some loose glitter handy, but it’s nice that it comes all in one. The color of the lip cream is actually more of a light mauve color rather than how it appears on the box, but I was okay with that because I love mauve. The lip cream itself is really nice, and the glitter added a nice touch.

If you’ve tried any of these products, let me know what you thought of them in the comments.