The company I work for decided to switch our holiday’s. We’ve always had Black Friday off in the past, but they took that holiday away from us and gave us Veteran’s Day instead. I’m not too happy about that because I’ve always done the majority of my Christmas shopping on Black Friday, and now I will have to be at work the entire day. Not only that, but it takes away our four day weekend too. We would always have Thanksgiving and Black Friday off, and then Saturday and Sunday followed. Now we’ll just have Thanksgiving off, have to go back to work Friday, and then have the typical two-day weekend. I would also always indulge in some alcoholic beverages on Thanksgiving night, but now I will be unable to do so since I will have to wake up and go to work the next day. The only good thing about having Veteran’s Day off instead is that I already put in for vacation for this coming week, so I just got an extra day tacked on to it.

So with that said, this post is going to be about my cozy three-day weekend spent in my house. On Friday, I wanted to have a little relaxing pamper session. I drew some hot bath water and applied one of my favorite face masks (as mentioned in this post). 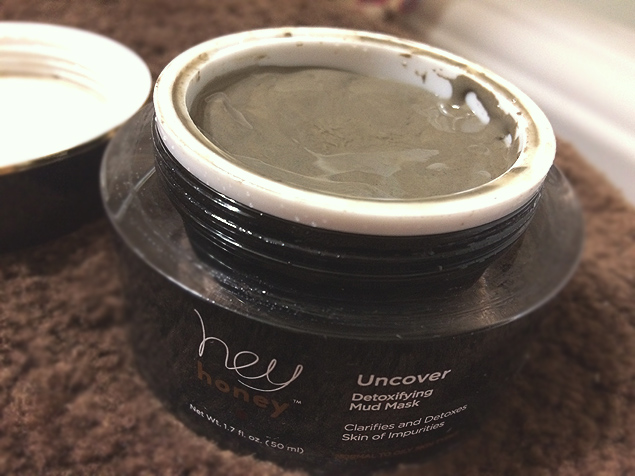 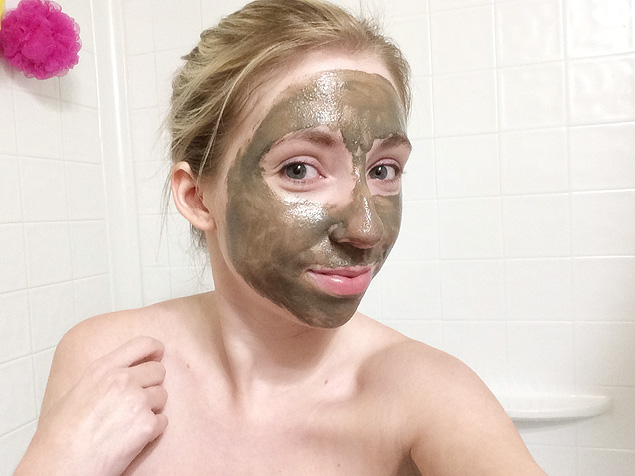 Then I added in the Yoga bath bomb from Lush. This was my first time using this one, but I wasn’t that impressed with it. I like to watch videos of bath bombs online before I buy them, just to get an idea of what they look like ahead of time. Based on the videos I watched, this bath bomb should have been a swirl of orange, yellow, blue and purple. However, the blue and purple on the inside did not want to fizz out for some reason, so I was just left with a dark yellow color that kind of resembled pee. Although this isn’t one of my favorite bath bombs, at least I didn’t have a mess on my hands like my last bath bomb experience. I know some people like to enjoy a glass a wine while they’re in the bath, but I don’t drink wine so I tend to bring a Rita in with me. 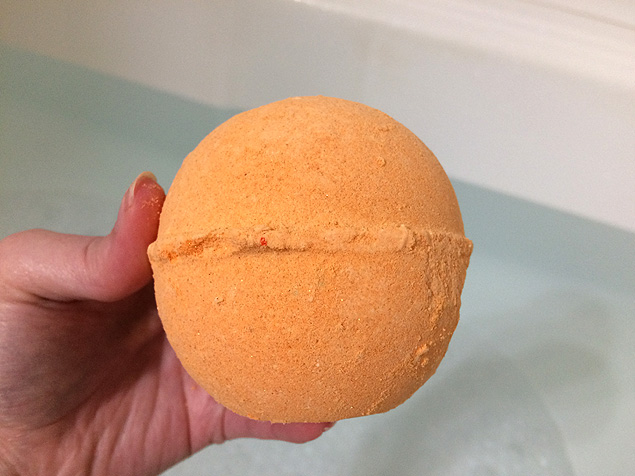 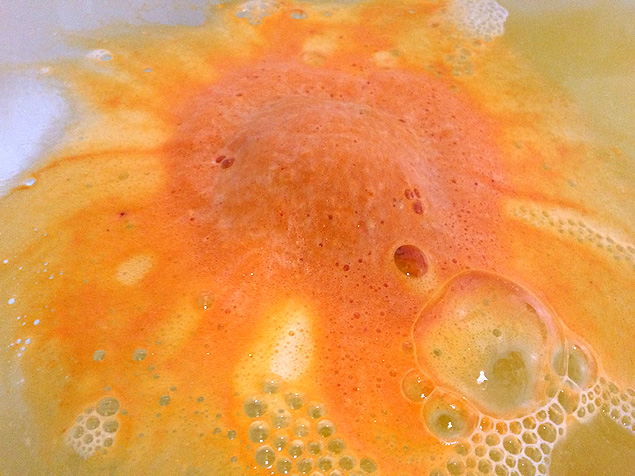 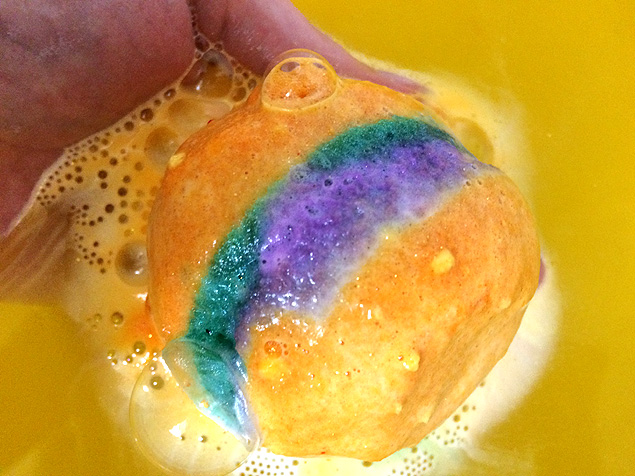 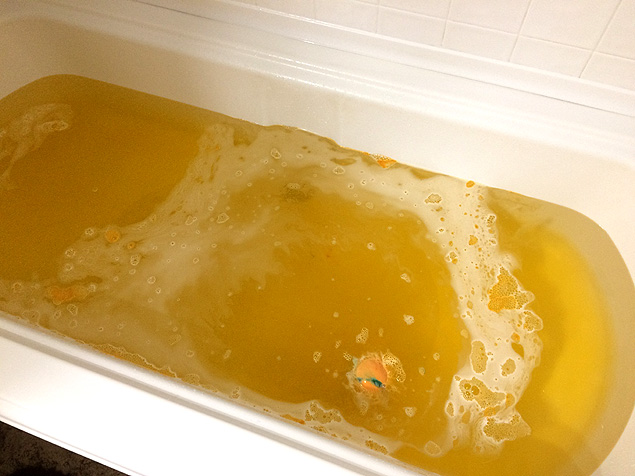 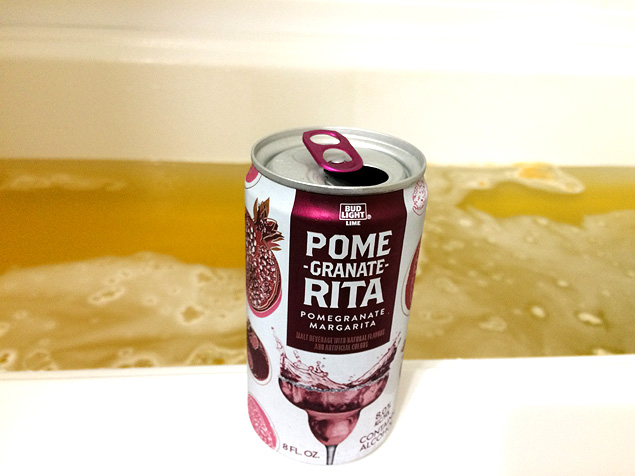 Afterwards, I got cozy with my newest faux fur blanket and watched one of my all-time favorite shows, Beverly Hills, 90210. I also had some yummy turkey pinwheels for a late night snack. 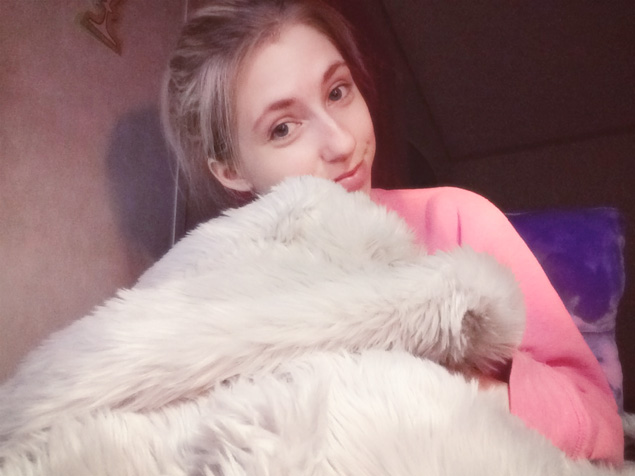 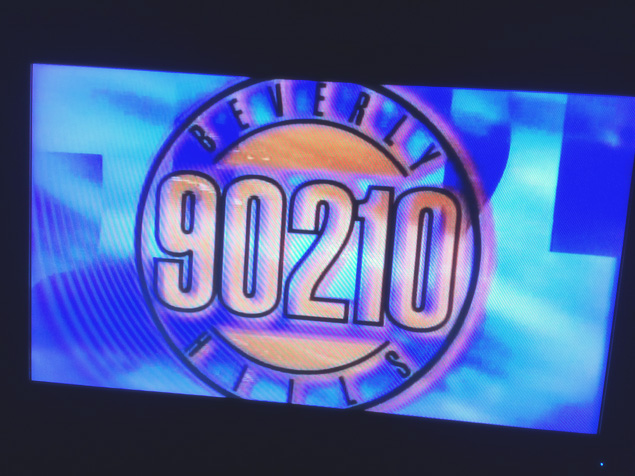 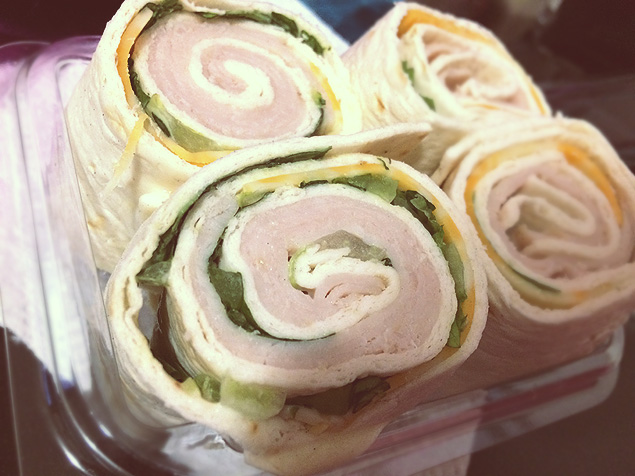 On Saturday evening, I had a few family members over for a movie night. It was semi-successful. Only two of us (myself included) stayed awake for all three movies. I took a selfie before-hand. Yes, I had to do my makeup for movie night, even though I didn’t really take any photos besides this one. That Tarte lip cream in shade Rose is one of my favorites. We started out with Night of the Demons, the 2009 remake version. It’s one of my favorite Halloween-themed horror movies. I have the original 1988 movie also. Then we watched Freddy vs. Jason, which is a huge favorite of mine. We finished the night with Spring Breakers, which I think is one of the most visually appealing movies I’ve seen. A lot of people don’t like that movie, but it’s one of my favorites. It was around 2 am when it finished and we called it a night. I would like to do another movie night sometime. 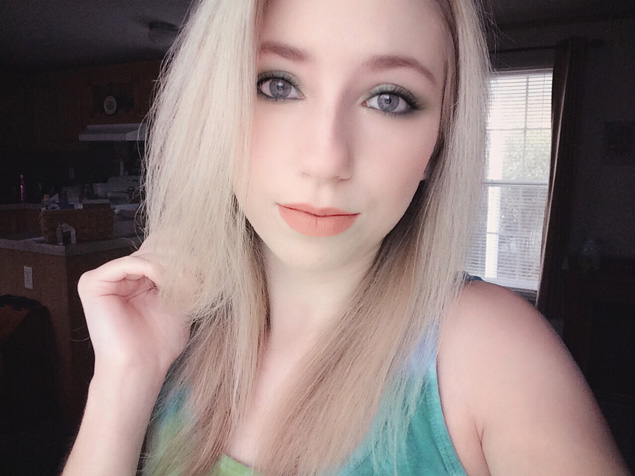 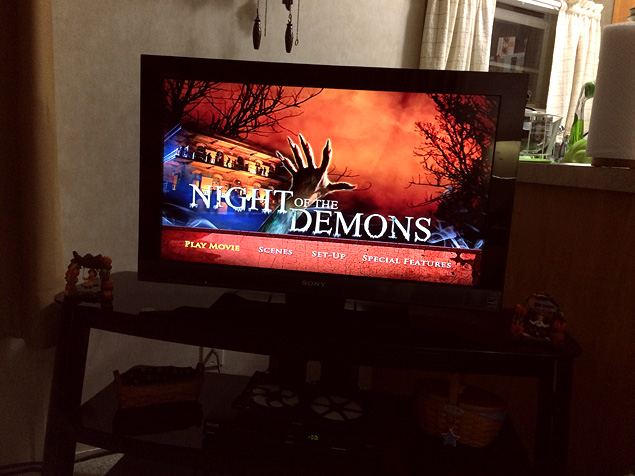 On Sunday, we got Chloe’s little memorial set up. We framed her paw print and set up the cards I received next to her box of ashes with flowers on top. Christina gave me a heart shaped rose quartz for her as well. It’s in that little baggy in front. I will eventually take it out of the baggy, but I thought it was pretty so I just left it like that for now. 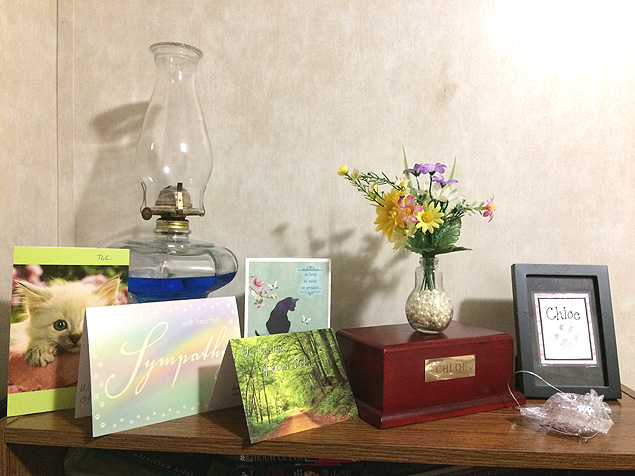 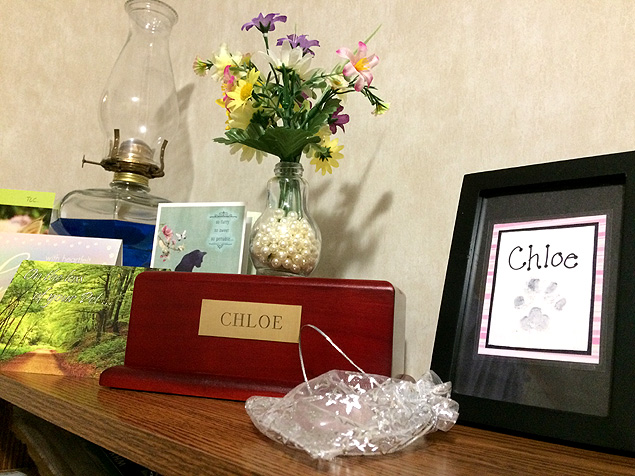 My mom cooked a pizza that she had gotten at the store. It wasn’t frozen, but it was pre-made. We added some extra toppings though, the green peppers and onions. The more, the better. I ate my pizza while I watched Paranormal Survivor on Netflix. 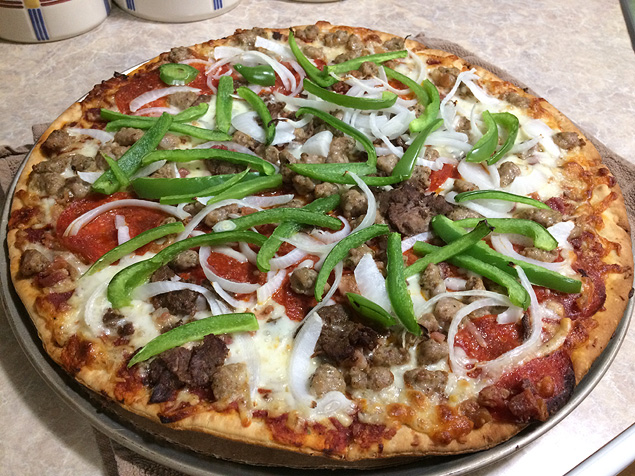 Then later on I caught up on the latest episode of Deadly Women (one of my favorite ID shows) and tried out the ice cream I bought the other day at the store. Believe it or not, I’ve never had a pumpkin spice latte, but this sounded really good. The description said it was coffee ice cream with swirls of pumpkin ice cream. Coffee ice cream is one of my favorite flavors, and I love pumpkin flavored things. This ice cream tasted awesome! I’m not a huge ice cream eater, but this was really good. It tastes exactly as described. The coffee to pumpkin ratio is very good as you can distinguish both flavors. 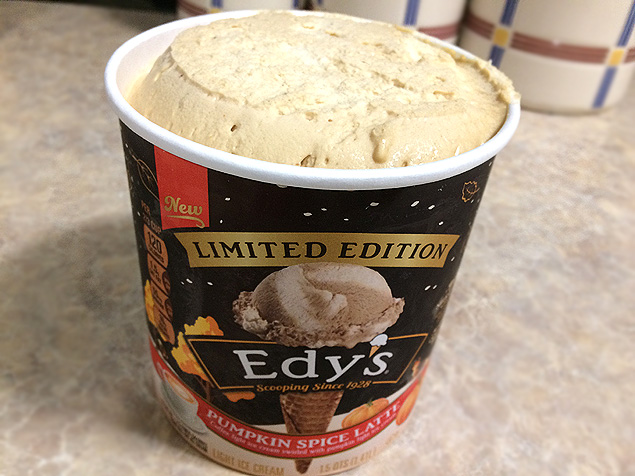 I also made myself a french vanilla cappuccino, which I haven’t had in a long time. It wasn’t foamy like I like it though. Maybe because I used water since I didn’t have any milk. It still tasted okay though. 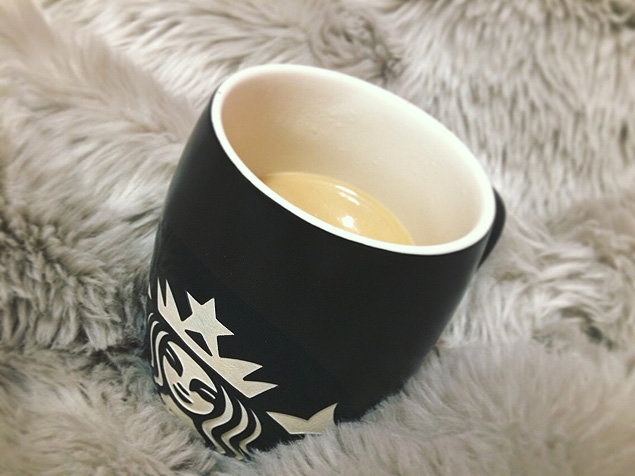 So that’s pretty much a play-by-play of my weekend. How was yours? Did you do anything exciting or just stay in like me?

22 thoughts on “Cozy Weekend In”