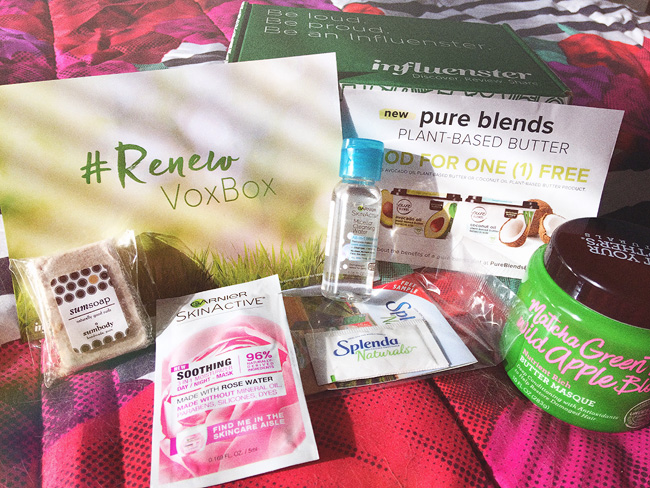 I got this Renew VoxBox last month from Influenster. I am really late getting this post up, but it arrived just a few days before I moved, so I was super busy doing last minute packing. Then of course I had to unpack and get settled, so I only recently tried out the products in this box within the past week.

I did not get any good photos of the box/products because I was dumb and decided to take the photos on my bed. It was later that I realized what a terrible idea that was. Kitty Cameron loves to lay on my bed, so his cat hair was pretty visible. I decided not to include the other photos for that reason.

I love these variety boxes where you get a multitude of items to try out instead of just one or two products. The first variety box I got was the Sparkle VoxBox, and I ended up loving that one. Since then, the other boxes I’ve gotten were brand boxes. They included one to three products of a particular brand. This is only the second variety box I’ve gotten, which I think are a bit more fun, but unfortunately I did not like this one as well as some of the others.

Sumbody: Natural Soap
I’ll be honest. I was not that excited to try this. It’s a bar soap, and I haven’t used bar soaps since I was a child. I used it anyway, and let me tell you, I ended up loving it! I think I have a new appreciation for bar soap again now. First off, this soap is made with all natural ingredients, which I was super ecstatic about. Second, it was very creamy. The smell was decent, albeit a bit strong. It’s hard to explain the scent. According to Influenster, there were six different scents that you had the possibility of getting. I got the Milky Rich scent. The other ones were Ahh-vocado, Luscious Lavender, Coconut & Cream, Goats in the Lavender, and Lemon Cucumber Mint. Personally, I think all the others sound more interesting than the one I got. Still, I really did love it. This is definitely a brand that I want to try some more of, and I would recommend them.

Garnier SkinActive: 3 in 1 Rose Water Moisturizer
My go-to cleanser that I have been using (funny enough, I received it in my Sparkle VoxBox), is Garnier, so I was excited to try this. Unfortunately, I didn’t really like it much. Some people were saying this caused them to breakout. I was already experiencing a continuous series of breakouts for some reason, and I did breakout again after using this. However, like I said, I was breaking out beforehand too, so I do not know if this contributed to that or not. It was only a sample size, so I only got one use out of it. It made my skin feel slightly tingly, but not in a good way. I love my Garnier cleanser, and it works great on my skin. Unfortunately, this product just didn’t work for me.

Garnier SkinActive: Micellar Cleansing Water
I’m sure this product isn’t new to a lot of you, as I’ve seen it raved about on lots of blogs. Maybe my expectations were high, but I really don’t see what the big deal is with this. It says on the bottle that it removes waterproof makeup, so I thought I would test that out. It didn’t really remove much of anything. Smudge? Yes. Remove? No. I will just stick with my cleanser which removes my makeup really well. I did find a use for this though. I use it sometimes after cleansing, just to help remove any residue that might be left behind.

Not Your Mother’s: Matcha Green Tea & Wild Apple Blossom Butter Masque
This is a deep conditioning hair mask, and I love hair masks! I was slightly hesitant though because I’ve tried the Not Your Mother’s dry shampoo and hated it so much that it made me not want to use any of their products anymore. I thought the packaging was nice though, and after opening it and smelling it, I fell in love with the smell. It smells so amazing! This product does leave my hair feeling strengthened and conditioned, however my hair feels slightly greasy after I use this. I will continue using it though, maybe once a week.

Splenda Naturals: Stevia Sweetener
I actually haven’t used this product as I really have no use for it.

Pure Blends: Buttery Spread
This actually didn’t come in the box. All you got was a coupon, in which you had to go to the store and get it yourself. I found that kind of annoying. To be honest, I’m still not exactly sure what this is, but I probably have no use for this either.

I received these products complimentary from Influenster for testing purposes.