I just got back from Ocean City, MD yesterday evening. I went with my mom and aunt, and I also met up with Brandy while I was there. That was my first time seeing her in six years. We initially met through blogging and social media over a decade ago, and we’ve met up in person a total of five times now. It just worked out that we were able to take a trip to the beach at the same time, so our paths crossed again.

I hadn’t been to Ocean City since 2009, despite living only four hours away. We were only there for a few days. We left Monday morning and got home Wednesday evening. That’s more than enough for me though. I was so glad to be coming home. I absolutely love the beach, but going away on vacation is so exhausting. I’m highly introverted, so being around people non-stop for days straight with absolutely no alone time had me feeling tired and overwhelmed. Add on the swimming, walking, being in the sun all day, and lack of sleep, and it just about killed me. On the drive home, I felt so terrible. I had a throbbing head, my muscles were sore, and I was feeling a little queasy.

I still had a nice time though. It was nice to get away, and like I mentioned, I absolutely love the beach. I’m a Scorpio, which is a water sign, so it’s no surprise that I absolutely love being in the water. I especially love swimming in the ocean because the waves are a lot of fun. Plus, the ocean is so vast and powerful. It amazes me how beautiful this Earth can be.

Three days before our trip, I saw an article about a sea lice outbreak in Ocean City, so that made me nervous. Sea lice is a nickname for jellyfish larvae, and it causes stinging and itching after coming into contact with you. Fortunately, the lifeguard said it was no longer a problem when we got there. I swam comfortably in the ocean with no problems.

The photo at the beginning of this post is the view from our hotel balcony. This is the first time I’ve ever stayed anywhere that I actually had a view of the beach. I thought that was wonderful. I also attempted to sleep on the hard ass balcony one night because my aunt was snoring so loud. I am telling you, it was absolutely horrible! It was super loud, and it was all night long, hence why I mentioned lack of sleep above. It was actually quite peaceful out on the balcony where I could hear the waves, but I couldn’t fall asleep because it was way too hard and uncomfortable.

I didn’t want to pack too much stuff, so I didn’t take a lot of my makeup and hair products, hence why my brows and hair were a bit of a mess. My hair kept getting so frizzy! The photos above were right after I stepped outside, so it’s not as bad, but it definitely got worse the longer I was out.

Brandy’s hotel was five streets down from mine, so we would meet up on the boardwalk before hanging out. The first night we were there, my mom and aunt went and did their own thing, and Brandy and I went to Seacrets. I had never been there, though I’ve heard a lot about it. It seems to be a pretty popular place, and Brandy had been there before.

They have rafts and tables literally out on the water where you can eat and drink. Those are only available during the day though, and we went right as it was getting dark, hence why they’re all empty. 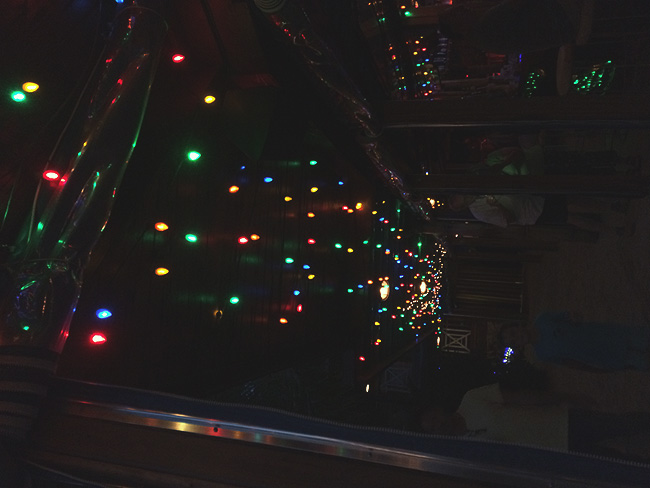 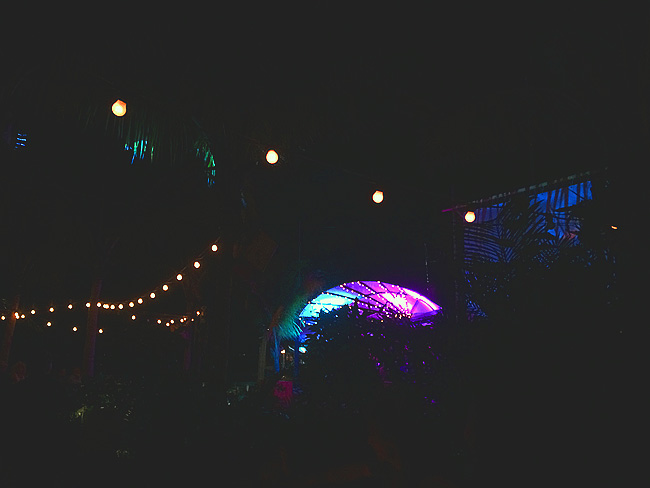 I absolutely loved the decor of this place. It’s Jamaican themed, so the ground was all sand, and they had palm trees all over. It really felt like I was in a tropical place. The lights also provided a nice ambience, and it’s right next to the water. I can definitely see why people really like it there. 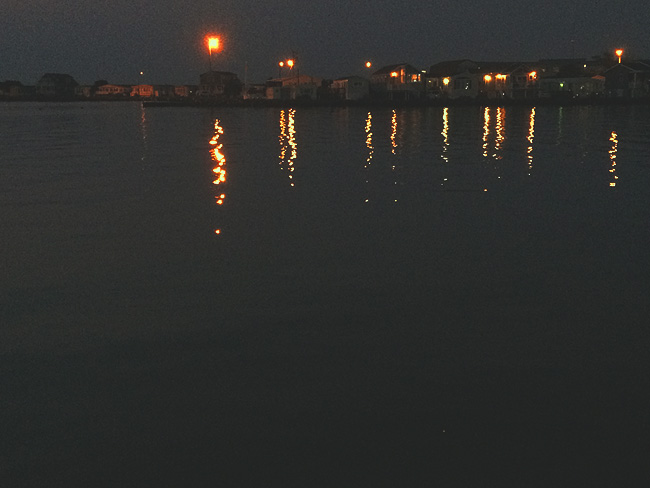 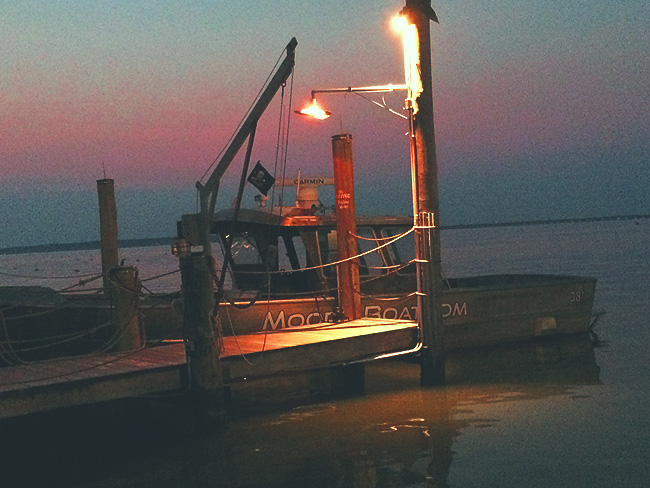 However, I definitely thought this place was better suited for a younger crowd. (Not that I’m old). It was more of a bar/club/hangout type of place, and they had loud music playing. I’ve never been into the bar scene, and I wasn’t drinking (too expensive), so it wasn’t exactly my ideal place. We had about a half hour wait to get into the restaurant area. We were seated right next to the live music stage, so it was really loud and kind of hard to hear each other talk. It was also dark outside when we were seated, so the only light we had was from the string lights. We had to use the light from our phones to see the menu. 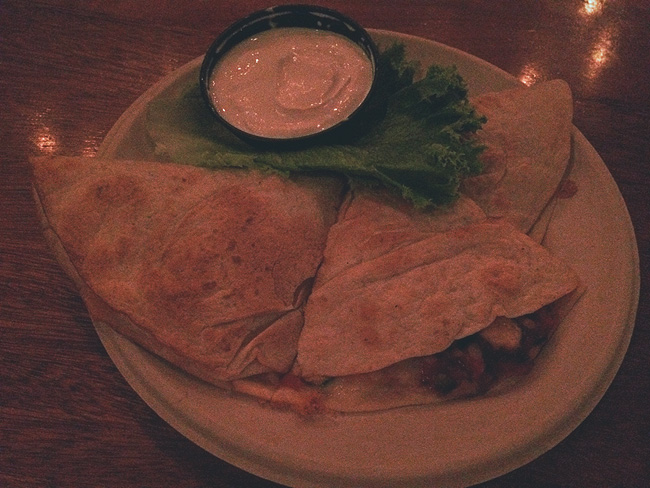 We both ended up ordering the Caribbean Quesadilla. I had to increase the brightness on the photo because it was so dark. The food was delicious though! It had jerk chicken in it, and the chicken had great flavoring. Plus, the quesadillas were packed pretty full. I definitely wish I could have another one of these! 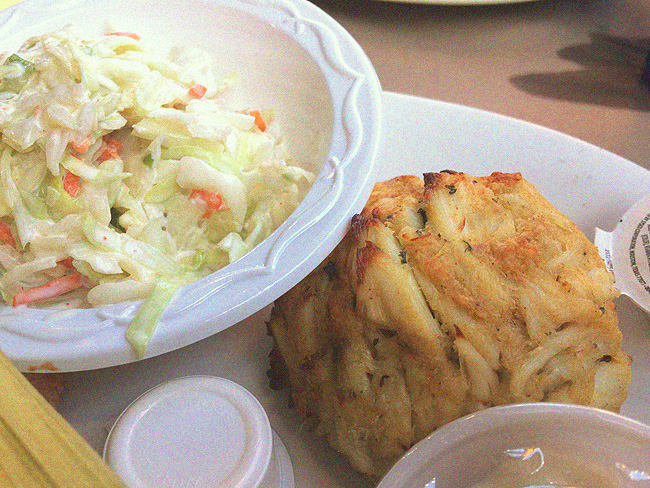 Tuesday evening, we were all supposed to go eat crabs. If you’ve been here before, you should know how much I love some delicious blue crabs! Well, that ended up being a bust because it was expensive there and nobody else felt like sitting for hours and picking crabs. I was kind of disappointed, but whatever. We ate at a place called Crab Alley and I ended up getting the combo, where you got to pick two types of seafood items and two sides to go with it. I got a crab cake and steamed shrimp with coleslaw and corn on the cob. This was a pricey meal, but it was really delicious. The corn was so fresh and sweet, and the shrimp were huge. The cocktail sauce they gave for dipping was one of the best I’ve ever had. It had a nice spicy kick to it, which I love. I don’t like when the sauce is too mild. The best of the bunch was the crab cake. It was so good! It had a lot of lump crab meat in it, which is how a true crab cake should be made.

After we ate, we all went down to the boardwalk for a little bit. I didn’t buy anything, and we mostly just sat and people watched. Brandy took some photos of us, which she might post on her blog. I was super exhausted at that point, so I wasn’t really feeling it.

On the way there and on the way back, we have to cross over the Chesapeake Bay Bridge. Some people are scared of this bridge, but I’m not really sure why. I think it’s pretty neat. Plus, it’s exactly the halfway point between our destination, so it’s always exciting when we get to it.