I ordered two new movies, and they came in the mail on Friday. Just in time for the weekend! I saved them both for Saturday night and watched them one after the other. It definitely made for a fun evening. It’s so exciting watching new movies for the first time. Especially ones you’ve been wanting to see. Maybe there’s something nostalgic about it too, but actually having the physical copies instead of just watching on Netflix makes it even more exciting. I don’t know, maybe that’s just me.

I have been wanting to see both of these movies, but I had been putting it off because of bad reviews they had gotten. I usually don’t pay attention to movie reviews because most of the time movies I love have bad reviews and the movies that everyone else seems to love, I don’t really like. That’s why I finally said screw it and went ahead and bought them.

Synopsis: A harmless game of Truth or Dare has deadly consequences when a sinister force takes over.

My thoughts: Horror movies have seriously been slacking over the last decade. I was always a big horror fan, but almost nothing has peaked my interest lately. (With the exception of a few gems). It’s been a lot of the same stuff coming out, like remakes, reboots, and all of the paranormal and ouija board films, one after the other. It seems like original ideas have been lost. Although this film does have some supernatural element to it, it’s not the same tired old ghost story. I thought this film was different and original, and that’s what I loved most about it.

This movie revolves around a group of friends who take a vacation to Mexico. While there, one of the characters (played by Lucy Hale) meets a guy who invites her and her friends to play a game of truth or dare. They think it’s silly at first, but then they agree to play, not realizing that doing so would unleash a demonic entity into their lives. Now the game follows them wherever they go. If they choose truth, they have to answer truthfully or they die. If they choose dare, they have to complete the dare, or they die. If they refuse to play, they die. The game will continue until all of the players are dead, so now they have to figure out how to stop it.

This movie held my interest through the whole thing. I was always wondering what was going to happen next. Some people thought the smiles on the characters faces (which would happen when the entity took over) were silly and stupid looking, but I didn’t mind them. I thought it was kind of creepy and unique. I thought the ending was really good too. I actually didn’t see that coming. 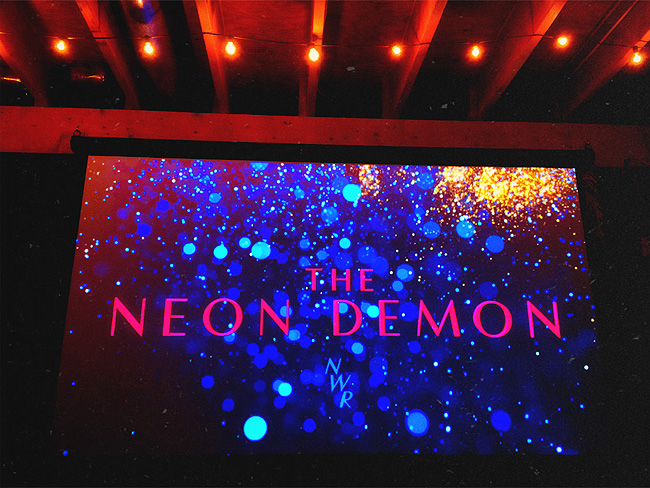 Synopsis: An aspiring model generates jealousy within the modeling industry and discovers that some people have sinister plans.

My thoughts: I’ve wanted to see this movie since the trailer first came out. As soon as I saw the preview, it reminded me a lot of the movie Spring Breakers, which is one of my favorites. Mainly because of the electronic music playing and the use of neon lighting. Cliff Martinez (who did the music on Spring Breakers) also did the music for this movie. In fact, there’s one scene where the musical score is very similar to one of the scores in Spring Breakers. I love movies that are visually stunning, so I had to see this on that basis alone. The bad reviews kept putting me off, but finally I got around to watching this.

I will say that I definitely think this movie underutilized the electronic music. There were some scenes where I felt like trippy sounding music would really work with what was being shown on screen, but that didn’t happen. The way this movie was shot was very beautiful, and I feel like more music in the film would have only enhanced the experience. (I happen to love audiovisual stimuli). This movie was definitely a bit slow and boring at times. However, the good parts do slightly make up for it. This film is dark and macabre at times, so it’s definitely not for everyone. The subject matter slightly touches on sexual assault, necrophilia, and cannibalism. Personally, I like creepy stuff. I actually wish they would have shown more of the cannibalism, just to take it even farther.

Then again, this whole movie is basically a big metaphor for the modeling world. It shows how the industry can change a person, how you can’t always trust people, and how the industry can eat you alive. It also shows how jealousy of another person can make you so desperate that you will basically do anything to try to get what they have. I thought it was pretty clever, actually. With that said, this movie could have been better. It seemed like they wanted to make a movie that was dark and different, but they were too afraid to take it all the way.